This blog has become like my personal journal. Sometimes I share things that are in my distant past and other times, I share things that I’m dealing with in the moment. This is one of those times that I am sharing something that is still quite tender…

I love to support the people in my life. Although, I don’t have a fear of public speaking, I prefer to be backstage helping others prepare for the spotlight. I prefer to be the person holding the ladder rather than the one climbing it. I feel encouraged when someone I’ve been coaching or mentoring goes on to accomplish a dream or reach a goal.

While this is genuinely part of my personality, I had to explore if there was something that I was trying to avoid by staying in the background. That’s when I noticed a pattern. 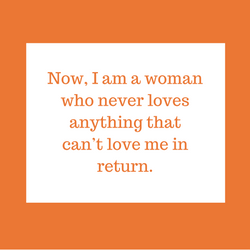 Whenever there has been an opportunity for me to prosper financially, I have either shied away from it or received it then immediately gave away the increase. I have done this for years, and it became obvious recently when I began to think about what’s next for me.

Fortunately, I knew exactly where this problem stemmed from.

Before I made the decision to follow Jesus, I followed money. There is an old rap song with a verse that says, “If it don’t make dollars, it don’t make sense”. And that was my mantra. It didn’t matter who got hurt in the process, I was going to make as many dollars as possible…by any means necessary.

That reality, along with my relationship with Jesus, changed my perspective towards money. I stopped chasing dollars, and I learned that my identity is not defined by the material things I possess. But somewhere along the way, I began to believe the lie that I can’t prosper financially because it will cause me to become the woman I once was.

Here is what is true: I used to be a woman who loved money. Now, I am a woman who never loves anything that can’t love me in return. I know who I am, and I know where I have grown from. So, I no longer fear what is behind me.

As I look forward to what’s next for me, I appreciate that I will have more opportunities to cheer on others as they run their race. But as a daughter of the King, I now realize that I am blessed to run my race, and I am prepared to prosper along the way.

What good would it do to get everything you want and lose you, the real you?