I had been asleep faced down when I felt his fingers invading my young body. Eventually, he found the place he’d been searching for all along. He moved my kiddie underwear to the side as he climbed onto my backside. He fondled my vagina and grinded. I remained still as though dead while tears rolled down my face.

Then, there was the sound of a door opening. Finally, someone was coming to help me… or so I thought. He hurriedly got off of me, laid down and pretended to be asleep. The person who came through the door was gone in no time. Fortunately for me, their short visit had put an end to my silent torment. 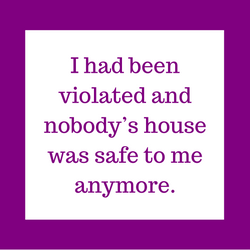 Six years later, when I was 12 years old, one of my favorite playmates complained that she was no longer going to spend nights at my house because I never wanted to sleepover at her house. She wrongly believed that I thought my house was better than hers. The truth was that I had been violated and nobody’s house was safe to me anymore. But she didn’t know that. No one did.

After my mother explained why my playmate felt my decision was unfair, I reluctantly revealed the details of the abuse. I hated seeing the pain that came across my mother’s face. That was the reason I’d kept the abuse to myself for so many years. I never wanted to hurt her.

My mother probably could have been labeled “overprotective” of her only child. When I was growing up, she seldom allowed me to sleep out and when she did, it was only at family members’ homes. I never objected because I didn’t like being away from her especially not overnight. But somehow, even with all of the protection and precautions, I was still abused.

The consequences of the sexual abuse have been far reaching. During my marriage, there were certain sexual positions that reminded me of that dreadful night. Those positions were off limits. Additionally, I had a fear that every little girl I knew would experience the same violation. Then, there was the anxiety that came with sleeping in unfamiliar places. This one I haven’t completely overcome.

Forgiving the violator took time. At first, I was afraid of him. Then, I was angry with him. That was followed by numbness. And eventually, with God’s help, I forgave him.

My healing process began over 28 years ago when I first shared the details of the abuse with my mother. I wish I could wipe my mind clear of the memory but instead, I recall it like it happened yesterday. Maybe I always will. But over these years, I have found that each time I share my unfortunate experience, it loses power over me, and I receive a deeper healing.

“…I have heard your prayer, I have seen your tears; surely I will heal you.”