As a young adult, I loved money and material things. Gaining more of them ruled my every decision. Even my feelings about myself were controlled by money and material things. The more I had, the better I felt about myself. It defined me.
When I changed my mentality regarding this, I put safeguards in place to make sure I didn’t fall into that trap again. One thing I started doing was inviting young ladies to “shop in my closet”. They had permission to take anything they liked— shoes, clothes, handbags, whatever. Anytime I didn’t want to give up something, that was a red flag that it had a hold on me, and it had to go! 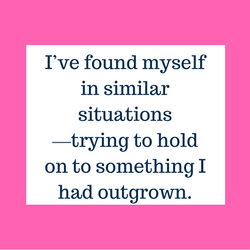 As I prepared for one of these shopping treats, I double checked my closet to make sure ALL of my belongings were in place. Just then, I realized I’d forgotten my favorite jean jacket in the car. Had this been any other clothing item, I would have marched right out to the car and retrieved it. But this was my favorite jacket. It was versatile. I could dress it up or down. I could wear it year-round. And although I couldn’t button it because it no longer fit, it still was my go-to jacket.

After several minutes of debating, I decided that I’d leave the jacket in the car. But if the young lady chose the matching jeans, I’d give her the jacket too. That was all I was willing to do.

When the young lady arrived, she went into my closet and began to try on clothes. I waited anxiously to see if she would choose the jeans that matched the jacket. She did, and I reluctantly went out to the car and handed over my favorite jacket. I was bummed about it.

A few weeks later, I unexpectedly received some money, and I used it to purchase a new jacket. The jacket I bought was gorgeous. It looked nothing like my old jacket. It wasn’t casual. It wasn’t blue. It wasn’t even a jean jacket. But it was exactly what I needed. And unlike my old jacket, it was a perfect fit.

There have been many times in my life that I’ve found myself in similar situations —trying to hold on to something I had outgrown. Sometimes it was material things; other times it was relationships. And like the situation with the jacket, I was holding on to something or someone that had served a purpose in my life, but the season had come to an end. And in many cases, they were better suited and purposed for someone else.

Letting go can be difficult at times. But I’ve learned that holding on to anything or anyone beyond God’s timing holds us back from the new thing He desires to give us; whether it’s a new relationship, a new job or a new jacket.

Forget the former things; do not dwell on the past. See, I am doing a new thing…